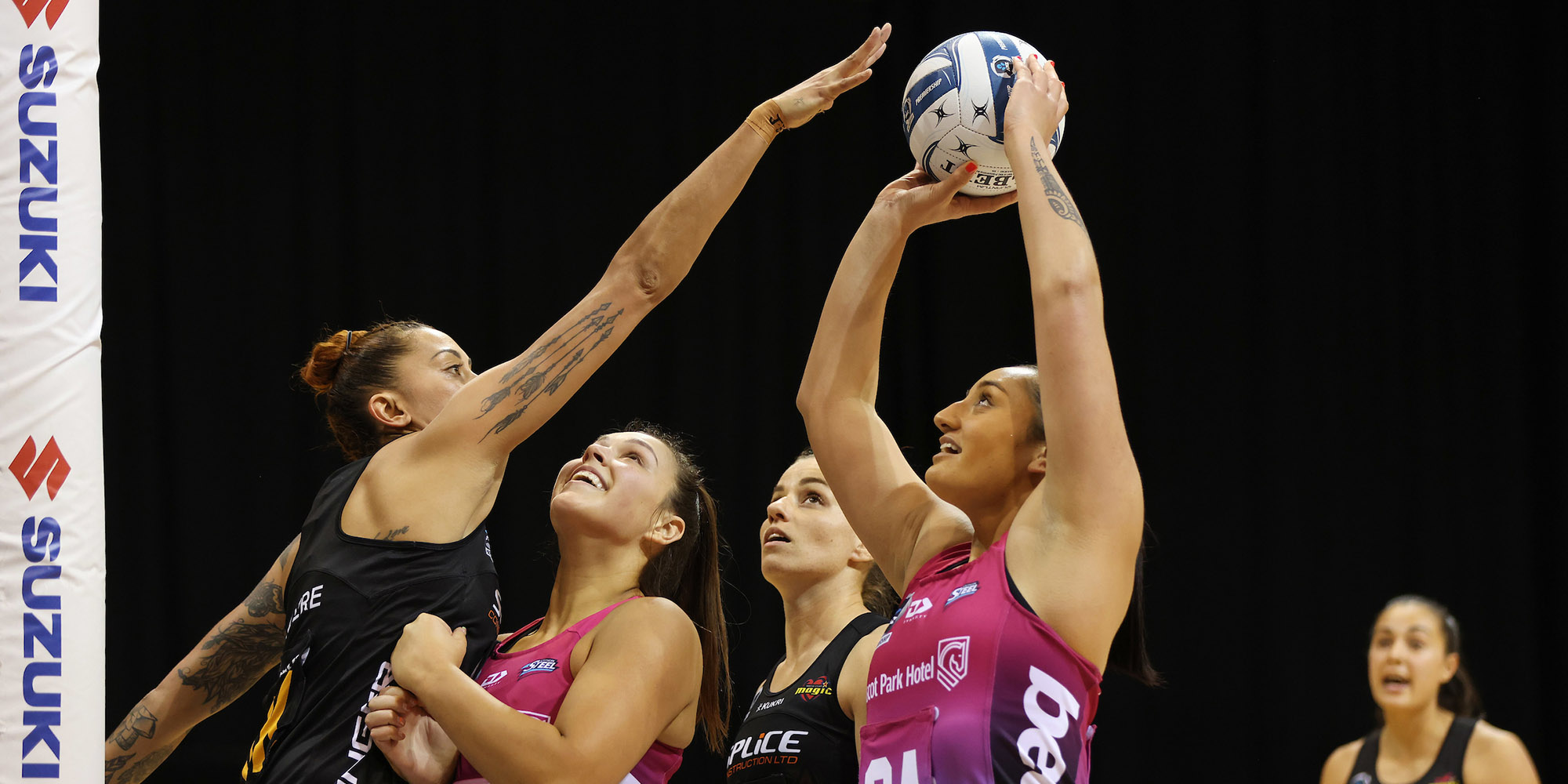 The Ascot Park Hotel Steel held on in the final quarter to claim a 56-54 victory from a determined Splice Construction Magic in Hamilton.

In the Magic’s last game of the season at Claudelands Arena, the team wanted to score a win for coach Amigene Metcalfe’s final home match in Hamilton.

And although they pushed the third-placed Steel in every quarter, and hit a six-goal streak in the final spell, they couldn’t pull it off, and the Steel’s ability to close the deal under pressure ensured the three points they needed to stay in finals contention.

Before the Magic had time to settle in after the first whistle, the Steel stole a 3-0 lead, with Tiana Metuarau and Grace Namara building on their new combination in the shooting circle.

But the Magic rebounded through some excellent in-circle defence from Georgia Tong and Erena Mikaere, who were getting their hands to a wealth of ball. At the other end, Grace Kara was back from injury at wing attack for the Magic and struck up a nice connection with Caitlin Bassett under the post to take the lead for the first time at 7-6.

Both sides, though, were guilty of some sloppy passing and squandering possession, so no team established the upper hand.

A couple of deflections from Mikaere just before the end of the first quarter ensured the Magic had a 12-11 lead at the break.

But the Steel started to settle into a rhythm, with Metuarau showing off her rebounding, shooting and feeding skills in and around the circle.

An intercept from the ever-steady Shannon Saunders (MVP of the match) in the last minute took what was a two-goal lead for the Steel out to four at halftime, 29-25.

The Steel welcomed their import shooter, George Fisher, back to the court after a couple of weeks off with concussion, and she didn’t miss a beat getting her shooting eye in.

While the Magic closed in again, with Mikaere on fire and Bassett’s shooting on-song, the Steel would then draw back out, with their defensive trio of Taneisha Fifita, Te Huinga Reo Selby-Rickit and Renee Savai’inaea putting up an impressive wall.

Selby-Rickit left the court with a niggling achilles just before the third quarter break, replaced by Sarahpheinna Woulf, just as the Steel established their biggest lead at that point – six – and led 43-38 going into the final spell.

But it was the Magic who came back to the court with more hunger, and an outstanding streak of six goals put them back to within one with 10 minutes left. All seven Magic players on court had a hand in the comeback – displaying some of their best netball of the season – but Mikaere was the stand-out in defence.

Fisher, who’d returned to the bench after a quarter, came back to help calm the Steel shooting circle when the difference was still one with five minutes to play (she ended the game with an impressive 17 from 19). And it was an intercept from Selby-Rickit, back in the game, in the final two minutes that secured the win for the Steel.