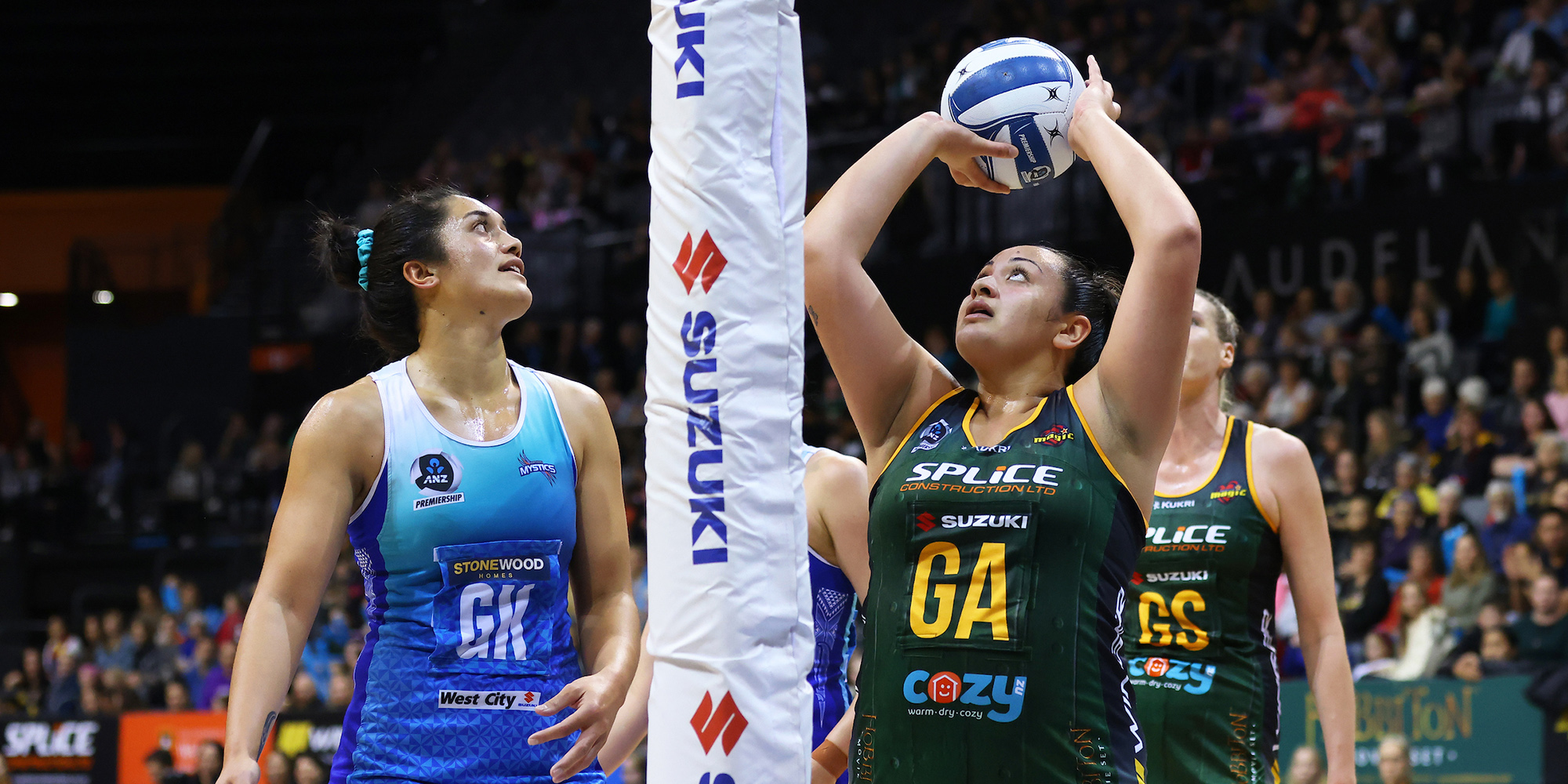 The Northern Mystics continued their charge towards the top of the table, holding off a fired-up Splice Construction Magic to win 68-63 and uplift the Hobbiton Cup for the first time.

It wasn’t a spotless performance from the Mystics, but it was a winning one, which sees them hold onto second place on the ANZ Premiership ladder, still a single point behind the Stars.

And it was another gutsy effort from the Magic, who held the lead at numerous times throughout the match and were never out of contention until the last two minutes.

But the Mystics attacking combination of Grace Nweke (who shot 57 from 61 at 93 percent) and MVP Peta Toeava is proving increasingly difficult to stop. And the second half injection of poised and potent goal attack Filda Vui, who took some pressure off Nweke, helped cement the visitors’ victory.

It was the powerful start that the Magic wanted, with goal attack Chiara Semple setting the pace. She wasn’t afraid to shoot from anywhere in the circle with success and her feeding to Caitlin Bassett was exceptional.

Magic captain Sam Winders was in flying form too, leading a full court defence on the Mystics, who found themselves 9-4 down.

Back from a stand-down with concussion, Mystics centre Tayla Earle was sharp with her feeds in to Nweke and her defence in the midcourt. The Mystics forced Magic into errors and closed to one, but were down 18-16 at the first break.

The Magic zoomed out to a four-goal buffer almost immediately, but with the defensive duo of Sulu Fitzpatrick and Kate Burley pouring pressure on the Magic shooters, the Mystics scored five in a row and assumed the lead for the first time.

The Magic made a defensive switch, bringing the quick and agile Georgia Tong into the defensive circle, and her presence sparked the home side into action again. A Winders intercept put the Magic ahead by two, and a buzzer beater by Semple had them ahead 36-34 right on halftime.

But the Magic suffered a heavy loss, with goal keep Temalisi Fakahokotau leaving the court just before the break with an ankle injury.

Both teams made important shooting changes to start the third quarter – Filda Vui replacing Bailey Mes in the Mystics circle, and Khiarna Williams coming on for Semple, who’d made a valiant contribution of 16 from 18 in her two quarters on court.

All through the spell, one team would surge and then the other would take a turn in the lead. No team was able to take full control. Another Magic goal in the final seconds, this time from the sure hands of Williams, had the teams locked at 52-52 going into the final run home.

Urged to go back to basics when under pressure, the Mystics stepped up their defensive effort to start the last 15 minutes, and got themselves out to a three-goal lead.

But rallied by Winders, the Magic were never out of the running, and some smart play from Williams, even after a fall, brought the score back level with five minutes remaining.

The personnel changes weren’t over. Williams had to leave the court, replaced by Semple, and in the
Mystics defence, Ama Agbeze came on at goal defence.

Agbeze claimed a small win straight away, forcing Semple to hold the ball a fraction too long on her shot. And the Mystics were able to go three up with two minutes left – a buffer that was out of the Magic’s reach.