A who’s who of New Zealand netball were on hand to watch Kia Magic stalwart Casey Williams exchange vows with her partner of two years lawyer Terry Kopua in December. 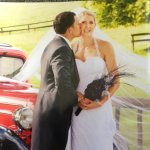 ``I have known Casey since she was 16 and it was quite sentimental and emotional to see where she’s come. The wedding was real Casey style, low key but done with a great deal of thought and taste.’’

Held at the beautiful setting of The Red Barn, in the Waikato, Williams and her beau embraced their values, backgrounds and future together after exchanging their moving nuptials in front of 150 friends and family. The netball guests included Taurua, Irene van Dyk, Maria Tutaia, Laura Langman, Jenny-May Coffin, Amigene Metcalfe, Erena Mikaere and Silver Ferns coach Wai Taumaunu.

Williams, 27, will now be known as Casey Kopua after officially changing her name.

``I did it as a sign of respect and a symbol of starting our lives together,’’ she said.